It’s everything a film should be, it’s fun, scary and the right amount of freaky. In terms of total theater experience Cabin in the Woods is the perfect example of how to execute that without taking itself too seriously. It is no exaggeration when I say that you will experience so many emotions just in the hour and a half run time. You’ll feel suspense, fear, laughter, disgust and maybe the odd “WTF?”. On the surface it feels and looks like a typical horror flick. There’s even the cliched group of characters you so often get in these type of films. We have the jock, the nerd, the party girl, the stoner and of course the black guy. But when we are introduced to them, we know something is off as they are all academic and actually care about their studies… whaaaat? Yes on the surface they look cliched but that first introduction to their intellectual personalities is what makes us care for them so much (you’ll see). As the movie progresses we get a real sense of the satirical approach to these characters and the genre in general which makes it hilarious but opens our eyes to the “logic” we so often see in these films.

What makes this film so special is it’s unpredictability. I mean if you judge a book by its cover then you probably wouldn’t think that with this film, even the film title is cliched. My advice when watching it is to have an open mind and enjoy the chaos. This is honestly the best horror flick I’ve seen and will be in my best films of all time list. It’s about time we got a truly innovative, fun movie. Mainstream film makers should strive to produce pieces of gold like Cabin in the Woods. If you’re still not interested in seeing this film, I have one word for you… “Merman”. 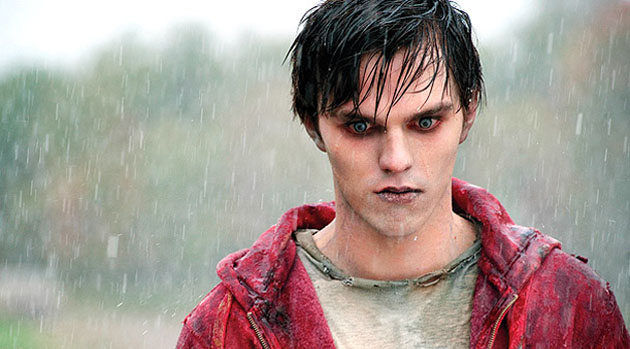 R (Nicholas Hoult) is a zombie who thrives for more despite being dead. He is aware of the zombie epidemic but still feels there is still hope for them. It takes saving a girl from being devoured by a group of zombies to slowly feel again.

I was expecting this to be more of a parody of zombie films like Shaun of the Dead but was pleasantly surprised by the charm and unique approach to the Romeo and Juliet story. Right from the go we get to know R as being a lot different than your average zombie as he listens to old classics to feel, it’s refreshing to see a zombie film from the zombie’s perspective; definitely original. R’s opening monologue is funny and takes a few amusing stabs at modern society making some similar comparisons between zombies and people today, we’re not too different unfortunately. Straight away my preconceptions of the film were wrong so I sat back and enjoyed probably the most charming film of the year.

It took me a while to notice the Romeo and Juliet similarities (cause I’m slow like that), but when I did I let out quite a loud “ooooooooh” and mumbled “R is Romeo and Julie is Juliet!” was quite happy with my self at the time. It added this whole new originality to it which I loved, as if it wasn’t unique enough. I like how the film doesn’t present us with generic zombies, they give us zombies that can gain memories from a human’s brain once eaten, we also get “boneys” who are ultra zombies that have given up on “life”. Little details which make the story interesting and different.

It’s a pretty beautiful story which is totally held up by the filming style and music. It’s artsy but down to earth really tapping into the emotions of the characters and without the score it wouldn’t have made as much of an impact. It really is a zombie film with heart.

Emma Stone has quickly grown to be one the best female actors today with her recent triumphs in Easy A, The Help, Crazy Stupid Love, The Amazing Spider-Man and Gangster Squad. Of course she has some big films coming out soon, one being a Woody Allen project and of course a Spider-Man sequel. Before she starts getting involved in some serious blockbuster films I thought I’d recap on her best 5 out of 15 films in my opinion, since I’ve basically seen them all. There are a couple of films that I had to leave out despite enjoying them thoroughly, the films being The Rocker, Crazy, Stupid, Love and Gangster Squad. Even though I enjoyed them a lot, they didn’t quite match up with the following five films which prove to be pretty awesome.

Emma Stone takes on the role of Gwen Stacy, Peter Parker’s love interest, and totally triumphs making Bryce Dallas Howard’s interpretation of the character insignificant. To be fair Spider-Man 3 didn’t do too much justice to any of the characters and the trilogy itself, so I will take that comment back. From Spider-Man history in terms of the comics and films, we usually see the girl becoming a damsel in distress and the hero has to rise above everything to save them. Which is why Emma Stone’s take on the character was a lot more unique and memorable. Instead of being eye candy, she actually had the brains and the courage to take on the villain as opposed to standing in the most vulnerable positions with no defense plan. Ultimately it was a great performance exuding genuine on screen chemistry with the lead (Andrew Garfield), making the Spider-Man reboot a successful comic book film.

This film challenged Emma Stone’s ability to take on a drama, after thoroughly proving her capabilities of starring in comedy flicks. The Help exposes 1960s America focusing on its Civil Rights dilemma’s. Emma Stone is of course the hero of the film playing an aspiring author, Skeeter Phelan, coming out of university with a genuine motivation of succeeding in her field of work. After experiencing her friends discriminating attitudes towards their maids, she decides to interview two maids about their experiences with their employers and taking care of white children. This soon prompts maids from all around the village to contribute to the book idea hoping to expose the realities of racism in America. It was interesting to see Stone involved in a film with such a dark subject. At first you’re kinda expecting her to break out a silly face or a weird noise, but she balances the seriousness of the character perfectly; making her passionate and witty, illustrating her intelligence as well as humor. She joined the ranks as one of the best female actors after this film, and being cast with a group of talented women would have helped her immensely.

Easy A definitely has Emma Stone written all over it. You can tell she had a lot of fun filming this movie since the character pretty much mirrors her personality. The film take’s on school culture with a unique angle integrating The Scarlet Letter as a way of boosting ones popularity. Olive Penderghast (Emma Stone) originally a nobody, has had enough of being invisible and attempts to climb up the social ladder by perceiving herself as the school bike. Eventually the lies get too much for Olive and the reality of having such a reputation means a lack of respect from her peers. As said before it shouts out Emma Stone with scenes of her being wacky and going all out weird, but that’s the charm of her character and ultimately leads to quite a fun and enjoyable film.

This is one of Emma Stones most inventive and stylish films, mixing zombies with comedy. It focuses on a group of survivors within “Zombieland”, which is a post apocalyptic world infested with zombies, trying to find their next “home”. For some, home is a twinky and for others it is a theme park across the country, but despite their difference in ambition they all have one goal, which is to survive. Emma Stone takes on a pro con artist called Witchita, using her skills along with her little sister to con their way to a theme park so that they can both finally liberate in some fun. Stone rarely portrays characters which exude sex, but this is by far her sexiest role, I mean what’s sexier than a girl who can take on zombies like a boss while looking as hawt as she does. There’s a reason she’s been linked with a future zombie film, “Pride and Prejudice and Zombies”, it’s because she completely smashed this one.

There’s no doubting the hilariousness of Superbad which is why this makes it one of my favourite comedies of all time. It has some of the most memorable characters and jokes you will see in a comedy film. It has a pretty simple plot, but what makes it so good is that it’s scarily relatable. We have all been in at least one of many situations Superbad explores, from indulging in messed up porn sites to going through literally anything to pursue a chance to bone. What also makes this film epic, is that it helped propel Emma Stone’s career from being unknown to being one of the most liked actors today, and for that we thank you Superbad. Despite the lack of Emma stone, it still ranks as her best film for me, and what a great film to debut in.

What are your Emma Stone favorites? and which upcoming Stone films are you looking forward to the most?