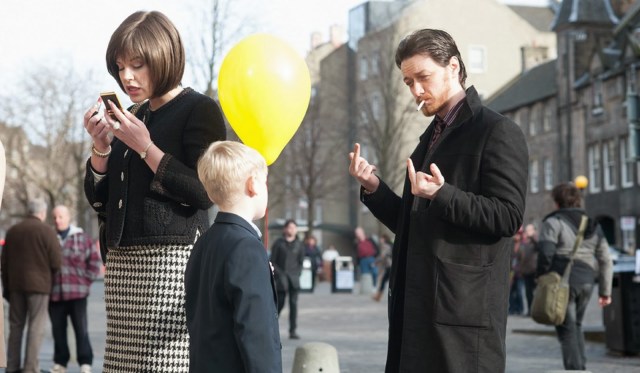 As the title would suggest this film is drenched in filth. Bruce Robertson (James McAvoy) is a corrupt Scottish detective with an addiction to sex, drugs and alcohol. With a possible promotion on the horizon we see him parade about partaking in what he calls “games” in order to undermine and manipulate his competition, instead of solving a recent murder which could actually get him the promotion. What follows is a darkly comedic series of events which bring out Robertson’s deeper problems which could explain why he acts the way he does.

Filth is one of those films that only the British could execute with perfection. Mostly because I can’t think of a nation which could make talking about the statistics of fellatio as hilarious as the Scottish. This is a film that takes dark humor to the brink of acceptable as we see Robertson blackmail a minor for oral then comparing her to a cheese grater seconds into it. Despite everything wrong about this character, we’re still intrigued by him. He may be a disgusting man but all we need as an audience to not be completely repelled by a character is a glimmer of human emotion. This gives us enough hope to root for a character, and for Robertson there’s enough hurt there for us to at least suspect a chance for this character to change.

That glimmer of hope comes from small subtle hints that he was once a family man, but due to certain circumstances they are no longer around. He uses the drugs, sex and alcohol to repress those hurt feelings. Once this becomes more evident about half way into the film, we start to understand Robertson and why he’s become addicted to all these substances. Props to James McAvoy for a committed performance executing Robertson’s development from mad to completely mad with conviction. A performance which is weirdly familiar to Trance, although that character develops in the opposite way. We see him as a normal person until the end where his fragility is exposed. What is similar between these characters is that we change our opinions on them right at the end. That’s what makes this film so great, it’s one of the better character pieces of recent years.

On top of the engaging narrative, we’re presented with a film that looks great and has an awesome soundtrack which gives Robertson a rock star persona. It also doesn’t fail to continually shock and surprise us with gross out humor and a deep look into a broken character. It’s larger than life and never slows down. Where it wont disappoint, is how much fun you’ll have watching it.