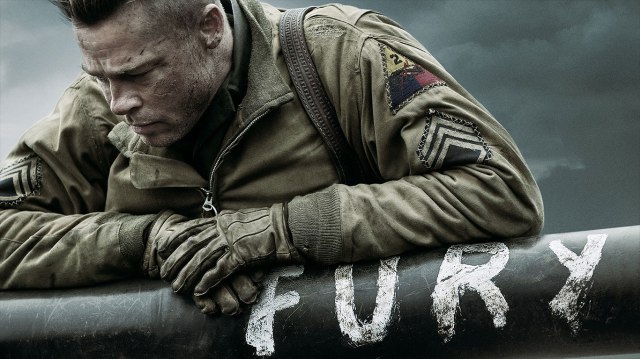 Fury puts us right in the seats of a Sherman tank during the last battles of WW2. It’s 1945 and the allies are making their final push into Nazi Germany looking to end the war once and for all. Having lost one of their brothers in arms, Wardaddy (Brad Pitt) and his loyal crew take on a young rookie (Logan Lerman) who looks way out of his depth. Despite being vastly outnumbered and outgunned, the fury continues to move deeper into the heart of Germany while teaching the rookie about the norms of war.

For me Fury is the perfect film for a night at the movies, it has almost everything I enjoy and want out of a cinema experience. the action is thrilling, the characters are badass and the story is enjoyable. But unfortunately it never amounts to anything more than an entertaining war flick.

Despite it not hitting the narrative heights I was expecting, it’s forgivable because all the elements work together to make a tense, heart thumping, sweat inducing ride of a war film that I look forward to watching again back to back with Saving Private Ryan. It may not be in the same critical league as some of the best war films we’ve seen in the past, but it would be hard to form an argument against this being one of the most entertaining. So of course the most memorable parts of the film is the action. The combination of gunfire, tanks in motion and a collected Wardaddy delegating battle tactics through a radio, forms this hectic, almost claustrophobic atmosphere as these guys are fighting from the confines of their tanks. They live in and for these tanks, and a large part of this film is understanding that these tanks turn into more than an instrument of war for these characters, it essentially becomes home. By the time we get to the films finale, we understand why it’s so hard for Wardaddy to abandon his home.

It’s easy to understand why these characters are so likable despite their barbaric nature, knowing David Ayer directed End of Watch. He was able to make that cop bond the main focus of that film and the payoff was perfect, making for an intensely emotional ending. This time around it’s disappointing not to feel such an intense bond between these soldiers. There are scenes which try to support and develop the dynamics of the crew and there’s no denying how strong the bonds are but by the end of the film these bonds aren’t translated through enough to make for a truly resonant ending. That being said each character is made their own with massive help from a great cast and solid performances. I don’t care how crazy people say Shia LeBeouf is, he’s still a great actor and proves it in this film by being totally unrecognizable in his role. I found Logan Lerman a bit iffy at the start but he grew from strength to strength as the film progressed, much like his character. As for Brad Pitt and company (Michael Pena, Jon Bernthal), they were as solid as ever.

For a WW2 film it didn’t feel much like a WW2 film. The locations, costumes and props looked realistic enough but I didn’t get the sense that they were fighting in that specific war. That being said, this film is more about the characters and the nature of war in general than WW2 specifically. We see how Wardaddy (Brad Pitt), despite his stern exterior, has to get away from his crew from time to time to truly let out all his repressed emotions. We learn that in war we have to pretend to be someone we are not, someone who can endure violence and exceed the limits of man. This is what Logan Lerman’s character has to learn. Despite essentially becoming a product of war, there is still chance for redemption. We see characters who are so far gone that we think there’s no return, yet they still have their moments which highlight something good inside them. Shia LeBeouf’s character grounds them a little, with his religious beliefs, his crew members may mock him but they believe in his ideas.

Despite a few underdeveloped elements such as the characters and religion in war. This is a film that is worth a second viewing based on the acting and action alone. We get gruesome violence, well choreographed combat scenes and a genuine exploration of brotherhood in war.