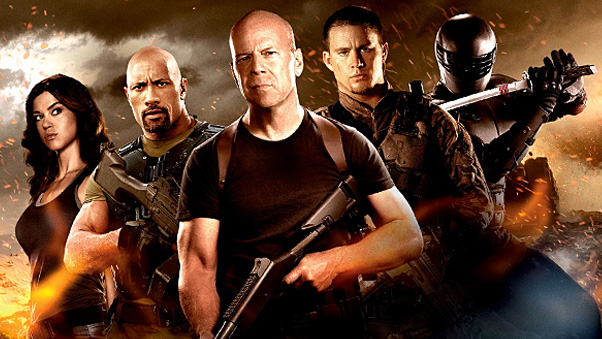 After the events of the nano-byte wars, Duke is now commanding officer of the G.I. Joe tactical force. With Zartan and Storm Shadow still roaming the earth free men, danger remains imminent.

I’m not a fan of the toys or the franchise in general but I did thoroughly enjoy the first G.I. Joe film. It had it’s faults such as the CGI and acting but I managed to find the charm in it. Never intending to be anything more, it was fun and extremely entertaining. Just as this sequel is. I wanted to bump this up to four stars because I actually quite liked the film but after watching it for the third time I couldn’t get past a few things.

First of all for an action film this is as good as it gets. We get heaps of awesome action sequences in a variety of forms. There’s hand to hand combat, shoot outs, stealth operations, boat chases and loads of explosions. The editing is great and the choreography better. It wont let you down there, and for that reason I didn’t hate the film as others did. I mean there’s some badass sh*t that goes down, and I’m pretty sure you’d let out the odd “daym” when you see flint skidding underneath an obstacle just to shoot a guy.

As for the plot, yes it’s about a bad guy wanting to take over the world, nothing wrong with that in my books. The method of it, is where the problems exist. It’s not meant to be realistic or anything but the nuclear angle of taking over the world is growing tiresome and overdone. And in the end the execution is too illogical to look past. When you have endless opportunities for a film of this nature, then I would hope for something a little different as the first one was.

Usually little things don’t annoy me but why does Storm Shadow put on clothing just to take it off during combat. If he finds it that uncomfortable to fight in it then don’t wear it in the first place! He is the definition of “poser” in the ninja sense. I won’t mention the other thing as it is a spoiler. It involves Storm Shadow and his past, all I will say is, how does it take over two decades to figure something out which only took under a minute when actually thinking about it properly. There’s quite a lot of illogical nitpicks throughout the film.

The weakest link of the film is Flint. He’s a cool character in terms of what he can do in combat but outside of that he is totally one dimensional and boring. He has nothing to offer at all. This is probably largely due to the script as he hardly had anything to say. It was disappointing as he seems quite entertaining during the films opening as he partakes in insubordination and I noticed they deleted a scene where he gets his ass kicked for it. Looking back I think that was decided as he seemed to have too much of a personality. That being said D.J. Cotrona didn’t give his best performance but I will give him the benefit of the doubt as he probably had nothing to work with.

This film as the G.I. Joe action figures are, is largely targeted at the male gender. It’s pretty apparent that the male target was always in sight as we’re presented with Adrianne Palicki in tight clothing, skimpy jogging gear and a sexy red dress. That being said I found her to be one of the main highlights of the film. I’m liking modern action films even more nowadays as women are being empowered with badass roles a lot more. The likes of Scarlett Johansson (The Avengers), Antje Traue (Man of Steel), Jaimie Alexander (Thor) and Anne Hatheway (The Dark Knight Rises) show that being a total badass is sexier than playing the girl next door. In that respect I hope to see more of these characters in the future. Adrianne Palicki, if going down the action film route will do well. That being said women will get the opportunity to drool over Channing Tatum and The Rock doing their thang.

G.I. Joe: Retaliation is far from being perfect but for an action flick it provides enough badassery and sex appeal to make it an entertaining night in.