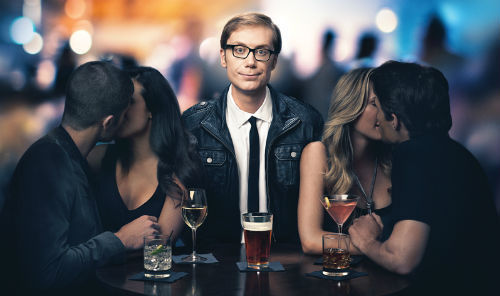 Roze-Verdict: If you’re a fan of Ricky Gervais and Steve Merchant projects then this awkward, cringy-worthy piece of comedy will find a place in your heart.

Hello Ladies follows Stuart Pritchard an Englishman hoping to find the woman of his dreams in the city of Angels, only problem is that his standards maybe too high for his own good.

I was pretty psyched when I came across this show on the world wide web, finally a show where Steve Merchant isn’t cast behind Ricky Gervais’s shadow (despite his height). Seemed like it was a bout time that he got a chance to star in something as the lead. Merchant has this typical British brand of humor which I can’t get enough of, he’s charismatic and incredibly witty which comes through in this comedy. Although maybe not as confidently as his British shows, which is fair enough due to a new target audience. It would be completely understandable if an American was to hate this show because this form of awkward, cringy, comedy with and anti-hero is quite unusual. I just hope it gets the chance for at least a second season.

It’s more than just a comedy, it has a lot of sad moments due to its relatable theme. We get a lot of moments where we might think “I’ve been there”, I mean we all get lonely and this show brings out a lot of those unpleasant memories. Luckily we get the chance to repress these memories during scenes where we can think at least it wasn’t as bad as that (Merchant having to buy drinks for a group of strangers in his efforts to pick up a girl, ouch). I find the sad scenes quite humbling at times because I can reflect off it ultimately turning into something I value a lot in the show.

The jokes are smart and sometimes slapstick, very rarely cheap which is refreshing to see. I quite like cheap laughs because I laugh at almost anything involving genitalia so I don’t complain but when you laugh at something which you either have never seen or rarely see, it makes it a lot more funnier and you feel good about it after. At first during the first couple of episodes I didn’t quite like that combination of comedy and drama within a show but when you accept it then you enjoy it for what it is.

As for sub plots and other characters, they hold up well and have a lot of potential if season 2 does go through. I wouldn’t say they were all engaging in this season but if there’s laughs then a comedy is a success in my eyes. Of course we all have different tastes in comedy, but if you’ve never heard of Steve Merchant and you want a good “what not to do” guide to dating then this would be a good place to start.